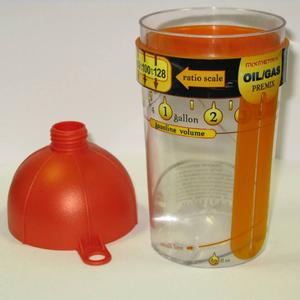 Help Small Brands Grow by Pinning Them - Pin It

The Mixmetrix Oil/Gasoline Dispenser is addressed to owners of gasoline-powered tools, outboard boat engines, auto/motor vehicles and any other equipment based on two-stroke engines.
With the Mixmetrix Dispenser preparing the right fuel mix for your “helper” is no longer a problem. Each time you can prepare as much fuel as you need and observe the oil/gasoline ratio as recommended by the manufacturer.
Dispenser usage is clearly shown in the video instructions provided. Engines are normally supplied with a screwdriver as part of their accessories (for those advanced and smart users who are able to determine the rpm value by listening to the running engine), a spark plug wrench to replace plugs once in two years, a user's manual in 5 languages with a comprehensive list of service centers in every part of the world, including Atlantis. And a single line in the manual and a single name plate on the engine reveal details of the oil-gasoline mixing procedure, which is actually applied throughout the entire service life of the engine.
The Dispenser removes any form of ambiguity.

Be the first to write a review of this product.

May we also suggest