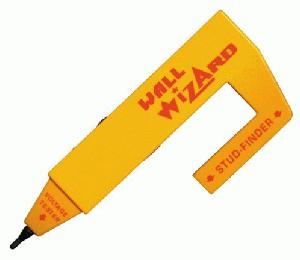 THE STUD DETECTOR THAT REALLY WORKS!

Van Nuys, California â€“ Wizard Industries, Inc., innovative creators of the Wizard line of DIY products, reports ongoing success for the product that started it all, the Wall Wizard.

The Wall Wizard was introduced as Wizardâ€™s first product about 2 years ago as an alternative to the slew of stud detectors that were near impossible to use. â€œThe principle on which most competitor stud detector products is based,â€� says Billy Carmen, CEO of Wizard Industries, â€œseems to be flawed. They constantly get false readings and are very difficult to use.â€�

That is because they are based on such things as wall density changes, which are often fooled by insulation, wiring, and other things behind the wall. The Wall Wizard, on the other hand, is a metal detector that locates the drywall screws or nails in the studs, indicating the likely presence of a stud. It is designed to be sensitive enough to pick up only the nails or screws, and not the deeper wiring or conduit and piping that can confuse other stud detectors.

Very easy to use, the Wall Wizard features convenient one-handed operation, and an ergonomic design for use on walls. The metal tip is ideal for quickly making a small indentation to mark the location of the stud.

But that tiny metal tip has many added features. It is a non-contact electrical tester perfect for testing electrical outlets, power cords, battery polarity, and many other things. â€œThe Wall Wizardâ€™s stud-finding capabilities alone are well worth its cost,â€� said Carmen, â€œand the built-in electrical tester is an added bonus for the DIY'er.â€�

Among a recent group of women product testers, all agreed that the Wall Wizard was a superior stud detector. They found it easier to use and understand than any other. Men were also unanimous in their praise of the Wall Wizard. According to one, â€œIt's simply a better product.â€�

Fast becoming a favorite in the DIY community, the Wall Wizard recently received kudos from the art framing industry. â€œThis is the easiest stud detector to use, and is ideal for locating studs when hanging heavier art and mirrors.â€�

The Wall Wizard works well with Wizard's other product lines, including the Woodworking Metal Detector line, and the Secure Quick disaster restraint systems (designed to help prevent furniture and artwork from falling during an earthquake, hurricane, tornado or other natural disaster).

â€œWe're very proud of our product lines, and it all started with the Wall Wizard,â€� said Carmen. â€œThe press has praised our products, and both customers and professionals agree: the Wall Wizard really works.â€�